Watch the action at the Unleash The Beast World Finals! The PBR XXVI World Finals 2019 will be held on Wednesday, November 6 – Sunday, November 10 in T-Mobile Arena, Las Vegas, Nevada. Where the world’s top riders and bucking bulls go head-to-head in this 5 days events! It is a part of PBR Finals Week, and features action-packed bull riding, plus live concerts, pre-event fan zones, after parties, rider autograph sessions, and more! 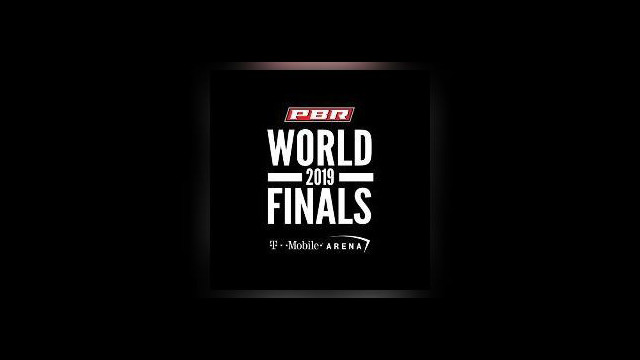 Don’t miss your opportunity to soar 550 feet above the Las Vegas Strip on the High Roller, the world’s tallest observation wheel November 6th & 8th from 1 pm-2 pm with some of PBR’s World Champions! This once in a lifetime experience gives you the opportunity to spend quality time with the World Champs, snapping photos while enjoying an open bar and taking in the 360-degree views of Las Vegas.

For the fans who plan on attending the PBR World Finals 2019 festivities in T-Mobile Arena, there are a variety of sponsored activities to get involved with during the 5-day period between November 6 – November 10, 2019.

Where is the PBR World Finals Rodeo 2019 held?

The PBR World Finals will be held at the T-Mobile Arena, Las Vegas, Nevada. Unleash The Beast is one of the largest events in PBR Finals Week in Las Vegas, make sure to get out to the rodeo early to watch the PBR XXVI World Finals events beginning at 2:00 p.m. ET. The main performance begins at 10 p.m. ET.

Where is the T-Mobile Arena Rodeo Grounds?

Las Vegas, NV
Getting to the T-Mobile Arena is easy. It is a multi-purpose indoor arena on the Las Vegas Strip in Paradise, Nevada. T-Mobile Arena is primarily used for entertainment events such as concerts, mixed martial arts, professional boxing events, and well as other annual sporting events. It’s located in 9777 Las Vegas Blvd South, Las Vegas, NV 89183.

As fans arrive on the famed Las Vegas Strip to watch the culmination of what promises to be the hottest world title race in PBR history unfold inside of T-Mobile Arena, the stage for the PBR World Finals Tailgate Party presented by Monster Energy outside on Toshiba Plaza will be equally as hot. Nightly, star-studded, free concerts will span the five-day November event and keep fans rocking in their boots.

The nightly concerts will begin on Wednesday, Nov. 6 with Chancey Williams and will continue throughout the week with performances on Toshiba Plaza from Season 15 winner of NBC’s “The Voice” Chevel Shepherd, country-rock music artist Casey Barnes, Texas singer/songwriter Chase Bryant and hard rock-country songstress Kasey Tyndall.

Don’t miss out on all the fun when your favorite artists take the stage at the Toshiba Plaza at T-Mobile Arena! 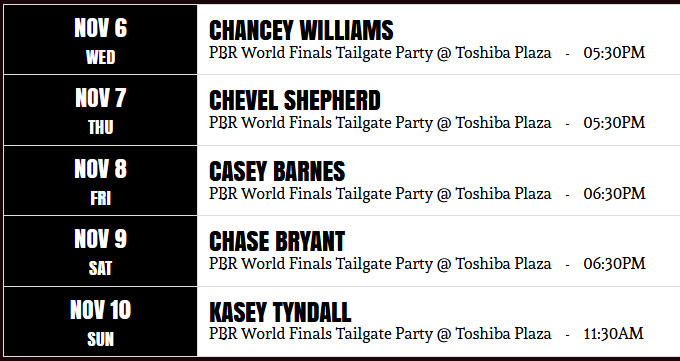 What TV Channel will the PBR World Finals be on?

The entirety of the PBR World Finals main performances will air live on the CBS Sports Network from November 6 – November 10 beginning at 2:00 PM. Because this is an exclusive deal between the network and the PBR, the PBR XXVI World Finals will not be shown on any other TV network during the 5-day period. NFRUpdates.Com has rounded up everything you need to know about how to watch the PBR World Finals 2019 on TV and online.

*30 minute “B&W Trailer Hitches Inside The Majors, presented by YETI, pre-show leading into the event.

FuboTV is a sports-centric streaming service. It offers a 7-day free trial and costs $19.99 for the first month before jumping up to $44.99 a month. It includes a live feed of WatchESPN / ESPN3 in dozens of markets.

Allows for the viewing of over 65 live channels at $40/month. In order to take advantage of the free possibilities, one would have to sign up and receive the free 7-day trial. If timed properly, one could watch the majority of the CNFR during the free trial period and cancel free of charge prior to the trial’s expiration.

Sling TV does not cover CBS or any other local broadcast station such as ABC, Fox, or NBC but it covers ESPN3. As a result, this would be a viable option for viewing the PBR since the events are primarily broadcast through ESPN3.

Allows for the viewing of over 50 live channels at $39.99/month. In order to take advantage of the free possibilities, one would have to sign up and receive the free 7-day trial. Once the trial is up, one could cancel the service free of charge.

Allows for the viewing of over 50 live channels at $40/month. In order to take advantage of the free possibilities, one would have to sign up and receive the free 7-day trial. Once the trial is up, one could cancel the service free of charge.

Allows for the viewing of over 75 channels at $49.99/month. In order to take advantage of the free possibilities, one would have to sign up and receive the free 5-day trial. Once the trial is up, one could cancel the service free of charge.

How to watch PBR live on Radio online?

All in all, the PBR XXVI World Finals is a landmark event of PBR Finals Week and a de facto defining period of time within any given rodeo year. For anyone who is a fan of rodeo, the main events and the surrounding festivities are must-see events and must-participate experiences if the financial means allow for it. Don’t miss a minute of the exhilarating PBR live stream action this year from Nov. 6 – Nov. 10. 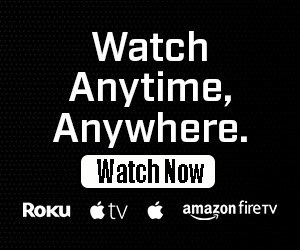